I often see HTML comments used to relate a closing tag to its opening tag; when a DIV or some other container tag contains enough content to make viewing the entire block without scrolling impossible, I think this makes perfect sense.

This is also sometimes helpful with C-like languages that use braces to delimit blocks of code.

Although modern development tools highlight closing tags and braces, HTML code in particular isn't always read within one of these tools (View-->Source in IE opens the source code in Notepad, for instance).

To assist, I think it would be helpful to have the option of attributing a closing tag with the same id used by the opening tag:

Our fancy editors would keep the opening/closing ids in sync and browsers could safely ignore the additional attribute.

In practice, this works quite nicely with the caveat that a page built like this is invalid. 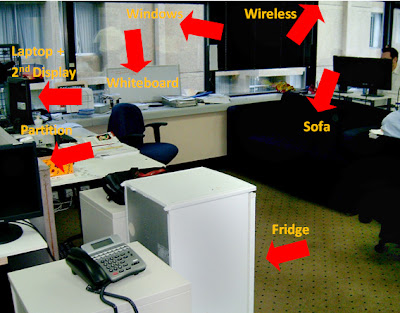 I recently reconfigured things at work...

The ToCache.ascx user control sets a simple @OutputCache directive in the markup and I can't see anything that would limit output caching in the master page, the hosting .aspx page, or the web.config.

I haven't ripped this apart and tried it in a clean site but I'm definitely experiencing this behaviour within the context of the wa.com development environment. I know MOSS controls (and somehow enhances) output caching but I have yet to look into how this works--as far as I know, I'm using the default output caching configuration.

Update: I wonder if this has anything to do with the control being hosted in a master page instead of an aspx page layout. Slim chance...

Disabling the "Reply to All" email button

Gotta love it when the CEO sets the technology direction in your office... (the identities of those involved in this memo have been obscured but this is a genuine email). Guess that's the final nail in the coffin for Outlook on my desktop.

Surely there's a Dilbert strip for this?

The CEO has requested that Corporate IT disable the “Reply to All” button for all staff in order to assist with email and time management.

We will trial this for a few weeks and then I will seek feedback on how effective this has been and request executive directors to bring the feedback to the executive management team for discussion.

The process will happen progressively over the next few days.

See http://www.wilsonmar.com/1clocks.htm for great discussion about time in a networked world.

Ever encounter a situation where the Visual Studio 2005 debugger absolutely refuses to break? I ran up against this problem this afternoon (yet again) and it took me a moment to discover the reason why.

Here's the scenario:
Inspecting the two breakpoints reveals nothing out of the ordinary; symbols are loaded and the debugger is breaking every so often, just for kicks. The code itself is executing happily, it seems.

The user control in question had an OutputCache directive set to cache the control for sixty minutes. Removing this little devil resulted in a slap of the forehead and allowed the debugger to break as expected.

The OutputCache directive prevents the control being added to the control tree of the hosting page at runtime; ASP.NET loads an existing version from the cache instead of executing the control code.

...kind of a silly problem since the debugger gives you no inidication the control is loading from the cache but it's all too easy to forget about this sort of thing!!! The golden rule I usually try to apply is to hold off on performance tuning until the very end of the development/testing process and this should generally include large-scale caching. Obviously this doesn't apply in a maintenance situation.
[Update: a few additional tips...

I don't agree with everything here but there are some good points in there...

I’ve been hacking with Javascript since ’97 or so and it always seemed so accessible I never thought about sitting down to actually discover what it’s all about. Between AJAX and widgets and funky calendar controls I've recently came across constructs I'd never seen before—admittedly Javascript is, even after nearly x years, a mystery to me. Or rather it was, until I read this article:

The article is reasonably short, very concise and explains a lot about the language itself. Better still, the article is targeted at .NET C# developers who know more about classes and method than prototypes. The examples are great as well.

Looks like Javascript isn’t going away any time soon so I’d suggest this article as a great intro to the rest of your life as a Javascript developer ;-)