Potluck 'Round the Hearth

While discussing the issues of public space for resources in Peopleware, the authors quote from Christopher Alexander's A Pattern Language:

"Without communal eating, no human group can hold together. Give each [working group] a place where people can eat together. Make the common meal a regular event."

The authors go on to highlight the relationship between shared space in broader societal terms (the home, in particular) and the office workspace.

As so many of us spend a great deal of time and a large portion of our lives at work, I believe strongly in extending my definition of "family" to include the people I work with. This fits naturally with the hierarchical structure found so often in work places: my immediate circle of co-workers becomes my brothers and sisters; my managers becomes parents, grandparents, uncles, and aunts; other colleagues in the organisation become cousins and second cousins.

From this mindset (and, admittedly from a mindset that includes fun and enjoyment!), I introduced my team to the potluck lunch about a year and a half ago. The potluck concept was not my idea: I attended a party held outside work by a colleague from my previous employer and the party was themed around the potluck; the people and layout of the workspace of my new employer simply allowed me to suggest we bring the team together on a regular basis and everyone bring a single dish of food.

Although we don't measure many things at Tourism--let alone productivity increases, the potluck lunch concept has proven successful in general. At the very least, it's a great opportunity to sit back with my work family, indulge in new and interesting food, and have a chat... a scheduled group downtime. It's also been an interesting way to introduce new team members to others in the office and give them a sense of how we work and what it feels like to be a part of our team. 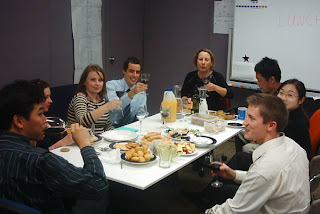 We aim for a monthly potluck lunch and usually go in for some kind of theme. When our first potluck was held, we had a very diverse team and everyone brought food representative of their home culture. We'll also hold a goodbye potluck when someone leaves the team.

The rules of potluck are few and simple:

We don't usually plan who's bringing what--it usually just works out. As we do have a few vegetarians about we try to cater for them and generally try to arrive at a balance of savoury vs sweet (dessert is always nice!).