When I recently wanted to store some information about a list (i.e., meta data) I couldn’t find an obvious way using just SPList. SPList does expose the PropertiesXml property but doesn’t expose a setter. What I wanted was a property bag or hashtable of key/value pairs. I’ve seen suggestions to add an extra column for this purpose but that could lead to redundant data, extra maintenance, and wasted space and essentially becomes meta data about the list items. In my opinion, columns define the structure of the data and aren’t meta data (but feel free to debate that among yourselves!).

Alex Angas was kind enough to provide an answer to a question I posted on StackOverflow on this subject. His solution was to make use of the Properties hashtable hanging off the list’s RootFolder object (SPFolder) and here’s my code to do just that:

Nice. It’s worth pointing out that using SharePoint Manager 2007 the RootFolder can be found within the site collection root; expand the RootFolder node to locate the folder named after the list in question. 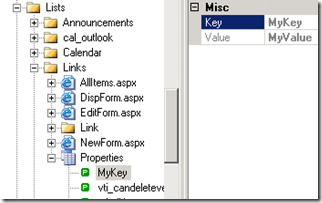 Update: Although RootFolder.Properties is a System.Collections.Hashtable, you’ll likely receive a SPInvalidPropertyException if you attempt to use anything other than a string, int, or DateTime. The debugger told me so ;-)

In answer to the same question Paul-Jan also suggested using a separate, hidden list to track meta data about a parent list (or lists, I suppose). I quite like this idea as a centralised “list meta list” and it could be as simple as three column list to identify a list by ID and store a key/value pair. On the other hand, I prefer keeping stuff like meta data with the object in question so my preference would be SPList.Properties; the RootFolder solution seems like a passable alternative.