If you’ve been following the progress of the westernaustralia.com website over the years, you’ll already know the site was one of the first in Australia to be launched on the MOSS 2007 platform and has been consistently voted as one of the top fully branded SharePoint sites in the world ever since. Having worked on the site since the get-go and as the current technical lead for the project, I’m the proud owner of the site’s programmatic aspects; today I’m tickled pink to tell you, the SharePoint community, about yesterday’s launch of the new Tourism Western Australia brand, Experience Extraordinary, and, more specifically, the brand’s impact on the westernaustralia.com website.

At the moment we’re working with the Digital Marketing team on a two (or three phase) approach (depending on how you look at it) to implement the new brand. The first phase unfolded in August last year and involved the neutralisation of the preceding brand’s elements (The Real Thing) while the latest creative design agency, Host, was appointed. Phase 1 of the new brand implementation kicked off in the dev team a little over three weeks back and involved making the Photoshop mockups provided by Host into a living website. This work focused largely on the page banners (vibrant imagery, the tab, and extra height), the navigation, the background colour (trust me—everything is more complicated than you might think at first glance with wa.com!), what we call the ePostcards element, and the footer elements.

Here’s a picture of what I think is a visually stunning website and a vast improvement over its predecessor: 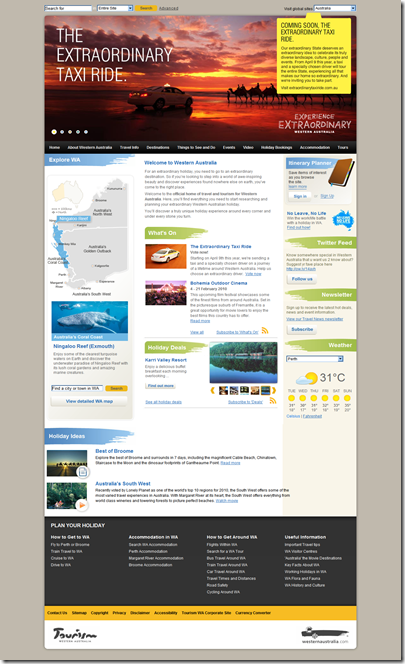 Phase 2 holds still more secrets but you can bet we’ll be making all the middle bits fit with the rest of the changes. One of the challenges we’ll be facing is getting the home page weight down from a whopping 1750KB and 100 requests. Stunning, certainly, but our CDN of choice (Akamai) allows us to get away with this sort of monkey business.

In addition to all the glam, we also took the opportunity to overhaul the heading infrastructure. This subsystem is designed to give content editors the ability to upload new banner images and all of the corresponding display data required to render the Flash banner. The Flash banner itself was built by Host from our previous banner and it takes as a parameter an XML file providing all the information it needs to display the banner images, text, links, and colours.

Obviously this data is stored in a list to which the FlashBanner.cs web part communicates at render time. Like I say, nothing in wa.com is as it first appears and one of the more complex requirements was allowing a subsite to override the banners displayed for for it and its children (in effect to support the major subsections of the site such as the destinations). Apart from simply walking up the site hierarchy recursively until a banner list is found, we then needed interrogate the list and emit an XML file acceptable to the banner; the URL to the file is finally cached with a dependency on the file itself.

Interestingly, this was one of the first times we started using event receivers on the banner lists to invalidate the cache when a banner is added, edited, or deleted; this keeps the content editors happy and productive and is one less of those annoying “is my banner cached in the browser cache | Akamai | reverse proxy| application cache | output cache | blob cache?” questions ;)

I’ll also point out we’re using a simple custom list for this instead of a picture library or custom list derived from a picture library. The previous version of this list was in fact a custom picture library but it suffered from broken thumbnails (which we now know how to fix) and proved rather cumbersome to use in practice (no reordering, a difficult view, etc). The move away from the picture library wasn’t, in retrospect, necessarily a great decision but it was probably the best decision at the time and came with considerable deliberation. The one major problem with the current approach is banner images must be uploaded separately to a real picture library and then referenced from the list; this is a bit of a double-up and disconnects the image itself from its metadata. As our understanding of list development and the peculiarities of these other list types increases, we may revisit this approach.

Also at a technical level, we recently move the site from our old IBM BladeCenter kit running Windows Server 2003 x86, MOSS 2007 SP1 (not even the Infrastructure Updates—gasp!), .NET 3.0, and a non-clustered SQL Server 2005 x86 database server. Everything was virtualised on ESX 4.0. We actually had three of these farms: one in prod, one in DR, and one for authoring; as content deployment never worked for the site, this meant a daily backup and restore of the content database from authoring to production and corresponding switch to or from DR (with DR actually being treated as a standby prod environment). That must have really sucked for our admin who had did that essentially manual task every business day since launch in May 2007. What. A. Drag.

From that setup, we moved to what was briefly the bees knees: Windows Server 2008 x64, MOSS 2007 SP2 + June 2009 CU, .NET 3.5 SP1, and a clustered SQL Server 2008 x64 database environment. Everything is still virtualised on ESX 4.0 and the entire setup is mirrored in DR. We’ve finally done away with the authoring farm so content editors are editing content in the production farm (we’re working towards a tiered security design and approval workflows, by the way, but our content editors have been working with the environment for years now and are mature in their understanding of how not to break the site ;). So no more daily content deployments and those of us in the dev team can finally start working with .NET 3.5 and LINQ.

For more on how we run the site, check out my Perth SharePoint User Group presentations and videos (things have changed but not that much):

If you’ve read this far, you deserve the chance to win a prize. Want the opportunity to take an extraordinary taxi ride around the state of Western Australia? If so, check out the “brand activation” microsite: http://www.extraordinarytaxiride.com.au/

Note: I am employed by Tourism WA as a contractor working for Diversus. Mediawhole, mediawhole.com, and this blog are not associated directly with Tourism Western Australia or the westernaustralia.com website. The information provided above  is published independently as a member of the public and does not reflect the views of Tourism Western Australia or Diversus. Please consult a Tourism WA representative for more information about its brand, campaigns, and websites.