I’ve posted a few entries on my findings around Silverlight penetration (see Resources, below, for more) but recently received a request for an update from someone called Harder. I’ve actually been meaning to post current stats for some time so thanks for the kick in the pants! I’ll aim to post updates every quarter going forward.

The figures represented are drawn from the Omniture SiteCatalyst web site analytics package, which tells me the number of visitors to our sites with a given plug-in vs the internet average over a given date range. Unfortunately the internet average is always shown as a constant with no further qualification (changing the date range doesn’t change the value and it’s unclear how the average is calculated) and Omniture does not indicate plug-in version. In the first case, I’m reporting the internet average from the point in time where I’ve recorded it—so I don’t have continuous data; in the second case, assume a mix of version 1 and 2. The same goes for Flash.

From the graphs below we can see one very interesting bit of information: Silverlight has been installed by 28.4% of internet users as of today (compare with 17.6 in September 2008). The number of users visiting our sites with Silverlight installed is considerably lower than the internet average, which is interesting because while our sites are graphically intensive and somewhat interactive we do target a wide audience with differing levels of technical ability. 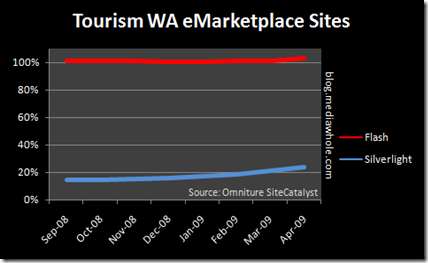 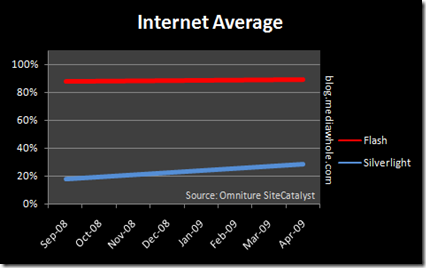