With the agency's first sites launched on SharePoint 2007 more than two years ago, it was recently time to give the flagship Tourism WA sites a facelift! The corporate site (http://www.tourism.wa.gov.au) is the first site to move across to an interim look and feel as Marketing prepare for the formal brand re-launch; the consumer site (http://www.westernaustralia.com) will be following next week. 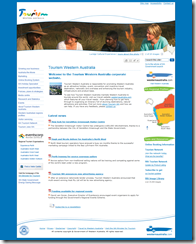 So how much effort was involved on the Corporate side? With no major content changes, it was really a question of modifying the existing CSS and and some of the images and other resources; all up, about a week's work—including a stack of minor content tweaks. Consumer has been more involved but I'll save that story for another post ;-)