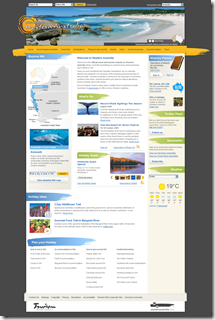 This is the first major visual change to the site since TWA launched WA.COM on the MOSS 2007 platform in May 2007. The site is regularly cited as an early, shining example of how far you can take custom branding and SharePoint. Under the covers, the site employs all the SharePoint tricks you’re used to: master pages, page layouts, web parts, content types, lists—you name it. The only thing we don’t make use of that might otherwise factor into a WCM site is SharePoint search and the BDC (we’ve built a custom solution for that).

The English-language sites alone delivered more than eight million page views in the last twelve months to an international audience. We currently run the site on the back of a single Windows 2003 x86 web front end (which also hosts the tourism.wa.gov.au site as a separate web app) and SQL Server 2005 database server shared by all of our MOSS-based web sites. Site traffic is additionally accelerated by Akamai and cached by regional Akamai nodes to ensure visitors can access the site quickly and reliably from all over the world.

The new changes are part of an interim visual shift as Marketing prepare for a new brand launch later this year. Apart from the look and feel, which was aimed at reducing clutter and softening existing brand elements, the site is moving towards dynamic (i.e. social) content (see the twitter feed!) and the home page in particular has been positioned to display fresh content like events and deals.

Want more? For some more examples of the heavily branded sites we’ve rolled out on the MOSS platform over the last year, check out the side bar on this page (“Some of the MOSS sites I’ve worked on”) and watch the videos (1, 2).

Disclaimer: I’m a contractor working at TWA. Mediawhole is not directly affiliated in any way with the agency or the web sites; when I say “we”, I mean the royal We.