Your initial foray into SharePoint 2010 user profile sync will likely lead you to the FIM client and, if you're anything like me, your mind will boggle at what FIM is, why it has to be involved at all, and where to start when things to horribly wrong.

I won't attempt to enlighten you on the first two subjects but I do want to point out some interesting and non-intuitive FIM user interface screens you may not be aware of and that will help you determine if your UPS setup is on the right path. By the way, you can run the FIM client as soon as the two FIM services are running on your machine (in other words, as soon as UPS has been provisioned but before you run a sync).

If you've got the UPS service in a running state, the next thing you'll likely want to do is run your first (or 50th) sync; in addition to the dodgy status screen within Central Admin itself, you can fire up the FIM client to watch from the bushes (the Operations view) as SharePoint, FIM, SQL Server, and AD do their magic dance. A successful run includes ten operations in my dev environment and I've previously posted a screen shot of this if you're interested.

If you look carefully, the operations view will reveal the user name involved with each operation and list some partition info as well. To dive in deeper, click the Management Agents button in the top menu; in my case, I'm presented with three MAs (if you've got more because you've been struggling with connections, you may be in trouble): 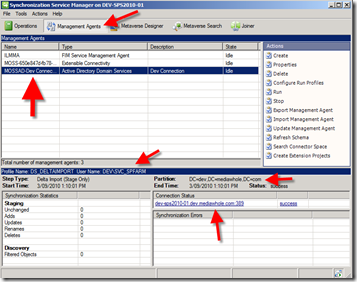 By viewing the properties for each MA (right-click on an MA and select Properties from the context menu or use the Actions pane to the right of the window) I can also examine specific properties to determine exactly what domain name FIM is configured to use and the accounts used to interact with AD, SQL Server, and the web service: 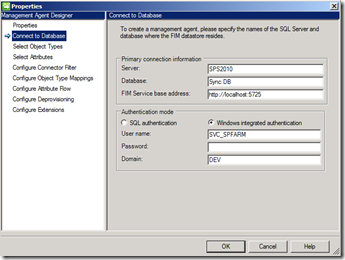 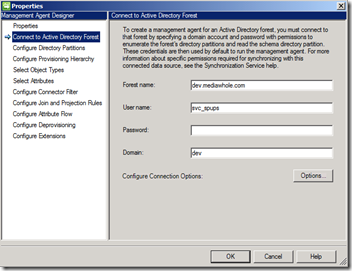 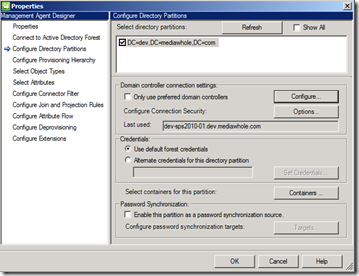 The attentive reader will note there's a lot of farm account action going on here and that's because both FIM services are configured to log on as the farm account and my understanding is they have to be because of the way the relevant timer job(s), which are also run as the farm account, interact with these services (says Spence). I'll also point out my svc_spups account is the account to which I've granted Replicating Directory Changes in AD.